After watching her widowed father drown, Caroline Taylor assumes his responsibilities as the Lighthouse Keeper at Windmill Point, and as the provider for her four siblings.  Four months later, however, she is given notice to leave by week’s end.  Although her performance is exemplary, her supervisor is prejudiced against her because she is a woman.

Her replacement, Ryan Chambers, stumbles into her life – and her home - drunk, unkempt, addicted to painkillers, and haunted by his memories of the Civil War.  Caroline faithfully keeps the light, while the new keeper sleeps.

They come to an agreement in which Caroline works as his assistant and trains Ryan to do the job.  Ryan is grateful for her help, and he finds strength and healing in work and in her family.  Caroline’s kind, non-judgmental ways help Ryan to heal, and Ryan’s strength and commitment to help Caroline’s family endear him to her.

Strange things begin happening around the lighthouse, putting Caroline and her family in danger.  Caroline doesn’t want to leave the home and work she loves, but in order to protect her family, she considers accepting a marriage proposal from the local innkeeper’s feeble-minded son.

This is the second book in Jody Hedlund’s Beacons of Hope series, and while I recommend the first book, Love Unexpected, this book easily stands on its own.

Jody Hedlund is the bestselling author of seven novels, including Captured by Love, A Noble Groom, winner of the 2014 Carol Award for Historical Fiction, and The Preacher’s Bride, winner of the 2011 Award of Excellence.  She received a bachelor’s degree from Taylor University and a master’s from the University of Wisconsin, both in social work.  She lives in Midland, Michigan, with her husband and five busy children.  She can be found online at www.jodyhedlund.com.
Posted by Kathy Jacob at 7:39 PM No comments: 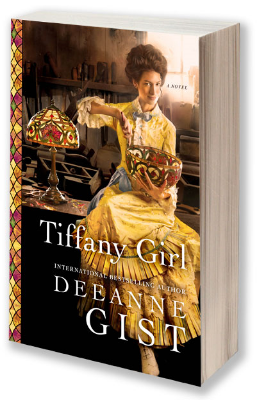 Flossie Jayne is an aspiring artist.  When Louis Comfort Tiffany comes to her art school to recruit women to fill the gaps left by striking men, she jumps at the chance, declaring herself a “New Woman.”  She is frustrated by working so hard with her mother, a “seamstress to the stars” of 1890s New York City, only to have her father gamble away their hard-earned money.  Flossie leaves home, takes up residence in a boardinghouse, and begins employment.  As a single child, she yearns for relationships with others that would develop into a “family,” and works to liven things up at the boardinghouse.

Reeve Wilder, a hermitic newspaper reporter, is appalled at the very idea of the “New Woman,” and in researching for a series of articles on the subject, learns that Flossie and her friends are not heretics, but decent people just trying to make their way in the world.

It was fascinating to learn about the process of making stained glass windows, and the Tiffany Company’s place in the Chicago World’s Fair, but this book is much more than that.  It was about the growing up that Flossie had to do as a young woman living on her own.  She had to face the truth about her judgment of others, her abilities as an artist, and her motivation for remaining on her own.  Although she faced many disappointments, she came through a stronger person, and always likable.

The transformation that happened in Reeve was pretty amazing.  He went from being pretty reclusive to being a person who sought out friends and enlarged his areas of interest.  Much of that was due to Flossie’s pointing out the truth to him.

The first thing I loved about the book was that it was so big.  Lots of pages to get lost in!  I loved the cover design, replicating stained glass.  The interior photographs of the actual places where the events took place added a lot to the enjoyment of the story.  I also liked that it had small chapters.  It was easy to squeeze in a chapter amidst life’s busyness.

If you like historical fiction, this is a great choice for you.  I loved that the author took a little-known fact to us now, and constructed a whole story around it.

I received a copy of this book from the author/publisher, in exchange for an honest review, which I have given.

Deeanne Gist has rocketed up the bestseller lists and captured readers everywhere with her very original, very fun historicals.  Add to this four RITA nominations, two consecutive Christy Awards, rave reviews, and a growing loyal fan base, and you’ve got one recipe for success.
With three-quarters of a million trade books sold, her awards include National Readers’ Choice, Book Buyers’ Best, Golden Quill, Books*A*Million Pick of the Month, Romantic Times Pick of the Month, Award of Excellence, and Laurel Wreath.
She has a very active online community on her blog, on Facebook, Pinterest, and on her YouTube channel.
Gist lives in Texas with her husband of thirty-two years and their border collie. They have four grown children.  You can find out more at her website http://www.iwantherbook.com.

Posted by Kathy Jacob at 7:07 PM No comments: