This is the story of Brook Eden, a beautiful orphan with a palatial education.  When her English best friend Justin Wildon discovers her true identity, everything in her world changes quickly.  She moves from urban Monaco, on the Mediterranean coast, to an English countryside manor.  Now that she is titled, is the new-found romantic interest from Justin genuine, or a way to tap into her fortune?  In order to secure her own safety in her new environment, it becomes imperative that she solve the mystery of her mother’s death.

Brook was an adorable character.  While she was beautiful, gracious, and well-educated, she had many (non-feminine) interests and abilities that served her well and made her a well-rounded, self-sufficient, and interesting person.

One of the most beautiful things in the story was her relationship with her long-lost father.  She quickly won his favor, but more importantly, she learned to turn to him for advice, comfort, strength, and companionship.

I loved this book, and gave it a 5-star rating.  The author skillfully weaves several story lines into a book that you won’t want to put down!

Those who enjoy reading Edwardian fiction about the titled class will enjoy this book.  Fans of romance and mystery will enjoy it, too.  It’s a book you’ll want to savor.

I received this book from the author/publisher in exchange for an honest review, which I have given.

Here is a passage I especially enjoyed:

"Nice?"  She laughed as he spun them into the dance.  "As many hours as I spent getting ready, I had better look more than nice."

"Pretty, then?"  His eyes gleamed.

He smiled, the challenge turning to a simmer.  "How about this."  He pulled her a little closer and leaned his head toward her ear.  "I have traveled the world over these last months, but nowhere, on no continent, in no country, have I ever seen anyone half so beautiful as you."

Her fingers gripped his shoulder,  "Better."

If you want more, here is a link to the first chapter: 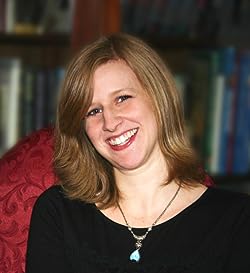 Roseanna M. White pens her novels beneath her Betsy Ross flag, with her Jane Austen action figure watching over her. When not writing fiction, she's homeschooling her two children, editing and designing, and pretending her house will clean itself. Roseanna has a slew of historical novels available, ranging from biblical fiction to American-set romances to her new British series. She lives with her family in West Virginia. Learn more at www.RoseannaMWhite.com.